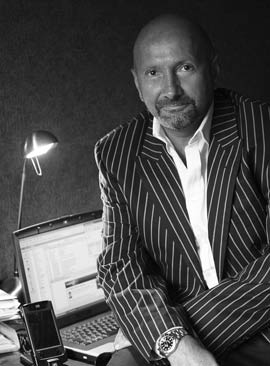 He set up the Andersen Cambridge Corporate Finance Practice in 1988, having transferred there from Andersen’s Glasgow office. During the subsequent 10 years, he established Andersen as the leading firm of advisers to Cambridge Technology and Life Sciences companies. He was a key driver in the formation of The Cambridge Network in 1995, and is one of its original six co-founders. During this period, as Honorary Treasurer of The Cambridge Foundation, he helped the University’s private fundraising achieve record results, including the much-publicised benefactions from Microsoft and the William Gates Foundation.

He returned to his native Glasgow in 1998 as Managing Partner of Andersen Scotland. Under his leadership, the practice achieved record growth until, in 2002, Andersen UK went in to voluntary dissolution as a result of the indictment of Andersen’s US practice. Together with a number of his partners and the majority of his people, he joined Deloitte Scotland on 1st August 2002 as part of Deloitte’s transaction with Andersen UK.

Having completed the integration of Andersen’s people and clients, he left Deloitte in January 2005 when he founded The Hallsworth Partnership, and began his new career as a non-executive director and consultant specialising in TMC and Life Sciences companies. His role tends to be a blend of corporate finance advisory, commercial advisory and, for pre IPO or public companies, corporate governance. He is qualified to chair audit committees and sit on Sarbanes-Oxley compliant US audit committees.

Fred also has a keen interest in social responsibility. He has been actively involved in assisting Emmaus, a global homeless charity, and the Prince and Princess of Wales Hospice Glasgow (“PPWH”). With Emmaus, he helped Terry Waite, CBE and Emmaus UK President, establish and expand the Emmaus Community in Cambridge. This was Emmaus’ first UK community for the homeless. There are now 11 UK communities and communities in over 50 countries worldwide. More recently, .was actively involved in fundraising for the new Emmaus Glasgow Community where he chaired the Emmaus Corporate Companions. With PPWH, he chaired the 21st Anniversary Appeal Committee in 2004. Under his leadership, the Appeal exceeded its target of £2.1m, the largest annual total ever raised by the hospice. Fred and Nikki are Platinum Members of Scottish Opera’s Alexander Gibson Circle”

Fred is also a keen sportsman. The more active sports of squash and tennis, and related gym training, are slowly making way for his new-found enthusiasm for golf. In his school days, he was a county schools badminton player, British Junior Archery Champion, and an internationalist with the Scottish Archery Team. He is also a qualified Day Skipper, although the boat was recently sold due to conflict with golf.